A quick post to notify you that I likely won’t be posting much here for the coming weeks. I do have some good excuses this time, however. This evening I am off for an eight-day trip to rural China, where I will be conducting research for my book (of which I will have some good […]

A visit to a construction site reveals a country where golf course building is both banned and booming — and where hope competes with fear every day.

I recently received an illuminating email from renowned golf course critic Darius Oliver — author of Planet Golf and Planet Golf USA — that I thought readers of this blog would find quite interesting. I am publishing a portion of that email here, with permission from Darius: I recently exhibited at the Beijing Golf Show, […]

Well, five-time British Open champion Peter Thomson would sure like to see it happen: Thomson, who captained the International team to its only victory over the Americans in The Presidents Cup, believes the time is right for the biennial series to be played in China and is urging its government and golfing officials to launch […] 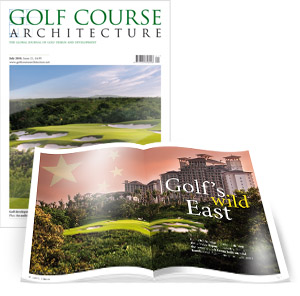 Golf Course Architecture magazine recently published a 2,600-word quote-packed story by Adam Lawrence that gives a nice overview of the whys and hows of China’s current boom in golf course development. Of course, no one seems to agree on what it all means or where it is all headed. Here’s how the story starts: At […]

In the September 13 issue of Forbes Asia Ron Gluckman files a profile of the Chus — dubbed the “first family” of golf in China by the magazine for their massive resorts in Shenzhen and Hainan. Gluckman even managed to score an interview with patriarch David Chu, which I am told is no easy task. […]

The current issue of Global Golf Post1 features a refreshingly candid interview with China-based golf instructor Cindy Reid, which may help temper some of the more pie-in-the-sky beliefs about the growth of golf here. A couple choice quotes: GGP: What is the biggest misconception about golf in China? CR: People assume that China is exploding […]